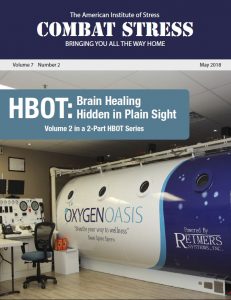 Recently featured in The American Institute of Stress

Most treatments for chronically debilitated TBI patients have involved pharmaceutical drugs, occupational and physical rehabilitation, speech therapy, and cognitive maintenance.  Many patients resign to merely manage their condition and gain very little improvement or begin a slow decline of cognitive or motor function. It is true that some mTBI (mild traumatic brain injury) patients recover to a degree using mainline therapies, but this recovery time can take 7 or more years, with significant loss of cognition, learning, and psychological affect during that time of recovery.

Using TBI Therapy’s standard of care protocols, patients at Dr. John Hughes’ TBI treatment facilities optimally receive HBOT therapies before and after intranasal and IV infusions, as well as with other healing modalities such as cranial osteopathic treatment, IV nutrition and hydration, and other adjunctive therapies to aid in neuro-regeneration.  The procedures and protocols used by Dr. Hughes’ Colorado-based TBI treatment clinic are patent pending, uniquely sophisticated, presently scarce, and at the forefront of neuro-regenerative medicine.  “The brain is in a metabolic crisis in a concussion…” Robert Cantu, MD (2013).  It is this understanding of what happens in a traumatic brain injury (even a mild TBI) that forms the basis of TBI Therapy’s unique treatment protocols.

Most mainstream therapies just work to treat the symptoms of a TBI using pharmaceutical drugs, speech therapies, vision therapy, and physical therapy.  While these therapies have importance, most TBI patients hit a plateau in terms of treatment benefits.  These TBI patients continue to suffer from post-concussive symptoms: sound and light hypersensitivity, sleep disturbances, memory loss, loss of concentration, headache pain, loss of libido, loss of decision-making, mood changes, loss of motivation, and inability to handle daily stressors.  Many TBI patients suffer so significantly from these conditions, that they may recover.They eventually lose hope…sometimes even at the expense of families and their own lives.

Most all of the above post-concussive symptoms of TBI are related to one major disturbance to the brain; in Dr. Robert Cantu’s (2013) words: “a metabolic crisis”.  Standard of care for concussion includes rest to avoid perpetuation of a crisis of gliosis (Gunther & Queen, 2013).  A TBI is like a bomb that goes off in the biochemistry lab of the brain…. all the experiments are in disarray and it will require tremendous energy to get the lab back in working order once again.

This energy must come from somewhere. The challenge is, however, that the brain, even at a resting state, is always using energy.  It can never fully rest because it is always working or healing itself.  The brain cannot be placed on the couch for a week with icepack on it to heal like a sprained ankle. We do not need our ankle to work every day, but we do need the brain to work at all times in order to sustain life.

So how can a “working” human TBI brain, consuming at least a 20 percent of the oxygen inhaled by the lungs, recover?  If we cannot rest the brain, the most important way to heal the TBI brain, in a metabolic crisis, is to give it more energy. The primary way to get energy to the brain is with more oxygen. Will breathing a few extra liters of O2 per minute be enough to help these TBI patients? Not really. The brain requires a significantly higher dose of oxygen to heal from injury.  It is hypothesized that the brain needs a continuous 3 to 4 times its regular inhaled dose of oxygen to begin healing from TBI (depending on its severity). The only way to significantly increase oxygen in the brain is with a medical grade hyperbaric chamber (providing 8 to12 times as much oxygen) or home hyperbaric chamber (5 to 6 times as much oxygen as normally inhaled when the patient is at rest).  With enough oxygen, the brain can begin repairing its hardware. Pressurized oxygen is analogous to plugging a computer (the hardware of the brain) into a wall socket with enough voltage to begin its self-healing.

Traumatic brain injuries (TBIs) are frequent among Soldiers, football players, and victims of assault. Studies of the impact of HBOT on TBIs have been inconsistent. One small study has had a dampening impact on the medical community’s enthusiasm for clinical adoption of HBOT for the treatment of TBI; with only 50 participants per group, the study was likely underpowered for small, but important positive (or negative) effects of HBOT (Wolf, Cifu, Baugh, Carne & Profenna, 2012). A full review of studies and their limitations have been provided by Eve, Steele, Sanberg, & Borlongan (2016), including extensive consideration of the difficulty in obtaining a control group that is free of confounding influences of the procedure itself.  The difficulty with this explanation, however, is that other uses of HBOT show clear benefits in spite of this limitation, which applies to all randomized clinical trials with obvious intervention.  A randomized clinical trial of patients with long-standing TBIs by Boussi-Gross et al. (2013) found improved cognition and quality of life measures during the HBOT treatment period. Clinical improvements can be seen at exposures of 1.1 atmospheres (ATA) or less; therefore, teasing the placebo effect out is challenging. Outcomes should be studied for correlation along the axes of the number of treatment sessions completed, the duration of each session, and the dosage (in terms of atmospheres and oxygen concentrations).  Studies of this type should also be restricted to clearly homogeneous clinical populations, which is extremely difficult in the heterogeneous population of patients with TBI, which can involve any number of regions of the brain, differing in severity, and degree of injury. A priori power calculations should be conducted to ensure that negative results are not due to small sample sizes.

Studies of hyperbaric oxygen therapy (HBOT) for treatment of traumatic brain injuries (TBIs) vary in results in part due to the heterogeneity in the type of scope of TBI cases and challenges in isolating the effect of pressure because subjects are prone to potential placebo effect.  Well-designed dose escalation studies of both pressure and oxygen concentrations compared to low pressure control would provide knowledge on dose efficacy. Other variables include treatment intensity (frequency and length of “dives”) and duration (length of treatment period in months). These sources of variation are usually well-controlled within, but not between, HBOT studies.  Meaningful clinical outcome variables in mild TBI (mTBI) include localization and extent of injury.

In a landmark study, Harch et al. (2012) applied hyperbaric oxygen therapy to individuals who had developed PTSD after blast-induced post-concussions. All subjects in the study were given half of the clinical protocol for the study (forty 60-minute treatments at 1.5 ATA).  Those receiving the full dose of HBOT showed a 14.8-point increase in intelligence quotient (p<0.001), a 39 percent reduction in the post-concussion syndrome (PCS) symptoms, an 87 percent reduction in headache severity, a 30 percent increase in quality on the PTSD scale, and 51 percent reduction in indicators of depression. They also impressively experienced a 64 percent reduction in the need for psychoactive or narcotic prescription medications. Overall, 92 percent of subjects reported sustained improvement six months after treatment, with functional improvements in cognition (39 percent), physical well-being (45 percent), emotional areas (96 percent) and significant reductions in anger issues. There is concern that improvements in both treatment and placebo groups demonstrated the Hawthorne effect; the study shows that significance of difference between groups’ outcomes (which were not likely due to chance) can be obtained in a manner that obliviates the concern of the placebo effect when the effects are unidirectional. A small clinical study of concussion patients reported cognitive improvements in both groups treated at 1.2 ATA air or 2.4 ATA 100 percent oxygen. There were, in fact, no differences in cognitive improvements between the two groups (Wolf et al., 2015).

There is solid evidence that hyperbaric oxygen therapy provides cognitive and neuropsychological improvements for TBI patients. However, the appropriate dosing of hyperbaric oxygen required to gain significant benefits for these TBI patients has not yet been determined. It is hypothesized that patients may gain more benefits from using HBOT at milder pressures from 1.1 to 1.3 ATA than at higher pressures (1.5-2.4 ATA).  These milder HBOT treatments at pressures from 1.1 to 1.3 ATA can be performed daily in FDA-approved home hyperbaric chambers over extended time periods (3 to 12 months) – at significantly lower cost per treatment than in an outpatient medical facility.

Further research backing the use of hyperbaric medicine for the treatment of TBI patients is available online (see https://tbitherapy.com/tbi-protocol-references/).