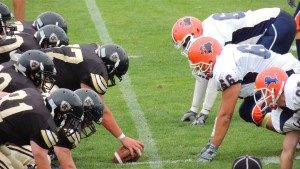 Will Smith’s new movie, Concussion, couldn’t have come out at a better time, just over month before the 50th super bowl! The movie stresses the dark side of football: tramuatic brain injuries (TBIs). The Department of Veterans Affairs recently put out a new study that 96% of deceased NFL players suffered from chronic traumatic encephalopathy (CTE) which is a degenerative disease thought to be caused by repetitive head trauma. With symptoms such as memory loss, depression, and dementia, the movie Concussion shed’s light on the struggles NFL players and former players face. The NFL has put forth new ideas to prevent the extent of trauma players face when they enter the game, and also try to track the amount of head collisions to keep it at a minimum. However, TBI’s continue to rise. The movie emphasizes the NFL’s efforts to hide dangers the sport contains. The opening scenes of the film share the sad story of a player who committed suicide after his 17 seasons in the NFL and over 70,000 blows to the head. His autopsy showed a severe case of CTE, linking his suicide to his football career. Concussion continues to show the struggles Will Smith has in his attempts to contact the NFL commissioners about the serious risks of the game and the need for change.

As the largest league in the world, the NFL is a hard one to conquer, but the fight continues head on. With TBI Therapy, we hope to help those with TBI reach a quality of life they dream of. Our protocol and patent-pending treatments gives promise to those suffering with TBI to a brighter future. In Colorado and California, our traumatic brain injury treatment is at the cutting edge of medical and mental health. Dr. Hughes’ intranasal platelet rich plasma combined with hyperbaric oxygen therapy is noninvasive, inexpensive, with low risks when compared to traditional mainstream treatments. Our therapies show the possibility of neuronal regeneration. Our future hopes are to prevent NFL players from ever reaching the status of CTE and helping them before it is too late.