What can we do to protect our athletes and veterans from chronic traumatic encephalopathy (CTE) or traumatic brain injury (TBI)? 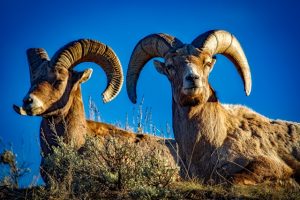 Head injuries are becoming more visible in NFL players and veterans with an increase in suicidality, mood disorders, and deaths occurring. While researchers continue to develop methods in decreasing the amount of head injuries during high risk sports, others are discovering how animals such as bighorn sheep protect themselves from concussions.

The spotlight is on the NFL. Studies have shown that NFL players are at risk of developing CTE, a debilitating and life threatening condition, from repeated concussions and even non-concussive impacts. “For the first time, doctors with binoculars in the booth can intervene and stop a game if they think a player should be evaluated after a hit, and sideline neurologists can keep a player from returning to the field no matter how much he protests” (Disalvo, 2015).

Researchers are also working on developing a “safe” helmet. Frequency and severity of the impact results were collected from sensors inside the helmets of players, but this has been discontinued due to inaccuracies. It is now believed that even with advancements in the technology behind helmets, there is truly no way to prevent a head injury from occurring in high risk sports.

Other avenues of preventing a concussion from happening is through pharmacological intervention. It has been found that concussions cause a build-up of tau proteins that can harm healthy brain cells. Tau proteins are found in a healthy brain, however after a concussion, the “brain resets itself and begins to initiate abnormal biochemical cascades that result in the buildup of abnormal proteins like tau” (Omalu, cited in Lartey, 2015). Through pharmacological intervention, perhaps a player can take a pill before playing a game, that can help decrease this production of tau proteins.

Now, researchers are looking towards the animal kingdom for answers. Animals such as bighorn sheep and woodpeckers withstand constant head impacts and apparently experience little or no brain damage. It is believed that these animals have the ability to increase blood volume in the brain to act as a cushion that protects it from impact. Specifically, woodpeckers have muscles that initiate this proactive cascade while bighorn sheep have “hollow pneumatic horn cores attached to its respiratory system that allow it to re-breathe its air and thus increase carbon dioxide in its bloodstream, expanding its intracranial vascular tree and enhancing the Bubble Wrap effect” (Myer, cited in Eck, 2014). Researchers are attempting to understand if high altitudes can create this Bubble Wrap effect in players by increasing blood volume in the brains arteries and veins.

So, what can we do to protect our athletes and veterans from CTE? Researchers are working hard to look within the brain rather than masking it from the outside. The answer to preventing concussions currently is to stay away from high risk sports or contact that can result in head impact. Unfortunately, this is not always an easy task.

Eck, A. (2013). Can bighorn sheelp help us prevent concussions? PBS. Retrieved from http://www.pbs.org/wgbh/nova/next/body/can-animals-help-limit-concussions/

Lartey, J. (2015). Concussion: doctor who fought NFL says ‘no equipment can prevent’ such injuries. The Guardian. Retrieved from https://www.theguardian.com/us-news/2015/dec/28/concussion-prevention-football-safety-brain-injury-bennet-omalu-nfl-will-smith